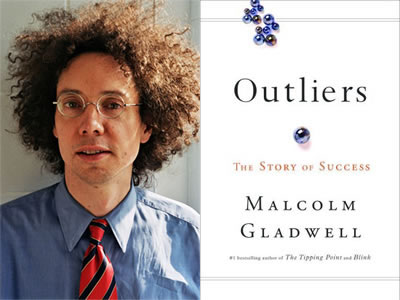 This is the second LLB book summary on a Malcolm Gladwell book (we previously summarized Tipping Point). His books are proving consistently thought-provoking. Outliers: The Story of Success

is about people who achieve extraordinary success in a variety of fields, from scientists to rockstars, and the complex web of factors which play a role in that success.

Outliers is an exciting romp through the context of different people’s success. Along the way, numerous key factors which influenced, for better or worse, that success are carefully deconstructed.

Some of the book’s conclusions are not backed up by studies (though some are) or much more than anecdotal evidence, but then a lot of the conclusions would require some very obscure data to be rigorously vetted. The 10,000 hour rule is almost certainly not the simple cause-and-effect relationship the book would have you believe (Tim Ferriss has discussed this in his critique of the rule), and some other conclusions ignore alternative reasons for success…but that really isn’t the point. Regardless of academic rigor, that the book’s observations make you reconsider commonly-accepted wisdom (‘he just worked really hard’ etc.) is value enough. And some of the facts presented do speak for themselves, for example the birth months of professional hockey players show a pattern which would keep any statistician happy.

What’s more, the book is fun. Examples from unexpected corners are myriad. Sometimes Gladwell can ham his points up too much, but this is a minor quibble. Mostly the arguments interlink smoothly. The exploration of people with super-high IQ is very compelling, and full of great anecdotes – Gladwell is an excellent storyteller. Some of the passages, most notably the transcriptions of cockpit dialogue from flight recorders of crashed aircraft, are unforgettable.

Considering the breadth of examples and sub-topics, this book is remarkably cogent and entertaining. I would highly recommend this book to anyone interested in being more than average, and/or parents who wish their children to be more than average.

I. Unacknowledged handicaps rooted in arbitrary cut-off dates. Gladwell notes how a staggering proportion of professional hockey players are born January – March (with those born later in the year growing less and less frequent). The reason? In school the cutoff for team selection is January 1st, meaning that kids who are born early in the year can be up to a year older than those born later in the year. When you are very young, that kind of difference is huge in terms of physical maturity. The effect, however, is cumulative. Because the January-March kids do well early, from the very beginning they are put in “A” teams and given more coaching and more hours of practice, which leads to the next key point about success…

This is probably the premise that Gladwell is most well known for, the idea that pretty much everyone who is really good at something has practiced that something for about 10,000 hours. Yet perhaps the more nuanced version of this argument is that people who have had the opportunity to practice this amount of time are those who have frequently gone on to success, because when opportunity came their way, they already had the requisite skills. A great example of this is Bill Gates, whose success is often regarded as the result of him being a great programmer (and shrewd businessman to be fair). Yet what is less well known is that Gates attended the only middle school in the United States with a computer terminal which allowed him as an eighth-grader to rack up the kind of hours of programming practice which, in 1968, was usually found in PhD students. Bill Joy, the creator of the programming language Java, has a similar story. He was so far ‘ahead of the game’ that during the oral exams for his PhD, he made up a particularly complicated algorithm on the fly that:

so stunned his examiners [that] one of them later compared the experience to ‘Jesus confounding his elders’ (p.36).

III. The timing of Economic and Technological Change

Once again looking at birthdates of highly successful tech entrepreneurs, Gladwell notes a pattern. This time, it becomes apparent that these guys were born at just the right time to take advantage of the personal computing revolution. Their success, to a huge degree, came from being born at a time when a new technology was emerging. “Their success was not just of their own making. It was a product of the world in which they grew up” (p.67).

IV. Intelligence Only Gets You So Far

This section revolves around the Terman Study, which tracked hundreds of students who scored as “geniuses” on IQ tests as children, and then noted how successful (I realize this is a complex term, but we’ll save that for another post) they ended up being. Turns out, they were pretty average!

But there’s a catch. The relationship between success and IQ works only up to a point. Once someone has reached an IQ of somewhere around 120, having additional IQ points doesn’t seem to translate into any measurable real-world advantage.

The key point, in terms of being successful, is that you don’t have to be the most intelligent, you simply have to have enough intelligence.

Gladwell sites a study analyzing the parental approaches of low-income vs. middle-class families and asserts that practical intelligence is, to a large degree, the product of a middle-class style of nurturing which gives children more of a sense of “entitlement”. This is not entitlement in the negative sense of the word, but rather the trait which allows people to successfully navigate complex social situations, systems and bureaucracies.

V. The Type of Work You Do (and your parents did) Matters

“These three things – autonomy, complexity, and a connection between effort and reward [...] are the qualities that work has to have if it is to be satisfying.” (p.149) Work that fulfills these three criteria is meaningful. Crucially, certain households have historically specialized in such work (Gladwell sites Jews working in the garment trade by way of example). This has a big impact on children:

The most important consequence of the miracle of the garment industry, though, was what happened to the children growing up in those homes where meaningful work was practiced [...] if you work hard enough and assert yourself, and use your mind and imagination, you can shape the world to your desires. (p.151).

“So far in Outliers we’ve seen that the success arises out of the steady accumulation of advantages: when and where you are born, what your parents did for a living, and what the circumstances of your upbringing were all make a significant difference in how well you do in the world. The question for the second part of Outliers is whether the traditions and attitudes we inherit from our forebears can play the same role…”

I. Culture doesn’t go away with time and/or changing environments

Those who come from cultures where people are say, quicker to anger when suffering a perceived slight or ‘disrespect’, such as the Southern States in the US, will retain such traits. This remains true even if they grow up in a different location and are far removed from their original roots.

Gladwell presents the findings from studies into the causes of plane crashes and shows that Hofstede’s concept of power distance is critical, as accidents often occurred where co-pilots from cultures with a high power distance (i.e. unwilling to challenge superiors) were far more likely not to challenge poor decisions.

III. Linguistic and Agricultural legacy has a huge impact

The logical structure of numbers in languages like Japanese and Mandarin, as well as the ability to say numbers faster, is presented as one of the reasons why Asians are better at Mathematics.

Furthermore, countries with a legacy of rice-growing, which requires a far greater level of input, concentration and hard-work are shown to continue to apply that work ethic with regards to studying.

“No one who can rise before dawn three hundred sixty days a year fails to make his family rich” – Chinese proverb.

IV. If you make kids work hard, they do better

Gladwell presents information showing that the reason why poor kids do worse in school is largely to do with how little time they spend studying outside of school, rather than the commonly argued ‘because poor schools suck’ rhetoric. Whereas wealthier kids are encouraged to do things like read, go to museums etc. during holidays, poorer kids tend to be encouraged to do these things less frequently. As a result, every year the gap widens.

It is not the brightest who succeed [...] nor is success simply the sum of the decisions and efforts we make on our own behalf. It is, rather, a gift. Outliers are those who have been given opportunities – and who have had the strength and presence of mind to seize them. (p.167).

Don’t Have Money for a Deposit on a Home? Do These Things First

The struggle for first-time buyers getting on to the property ladder is a well-reported news item at the moment.…